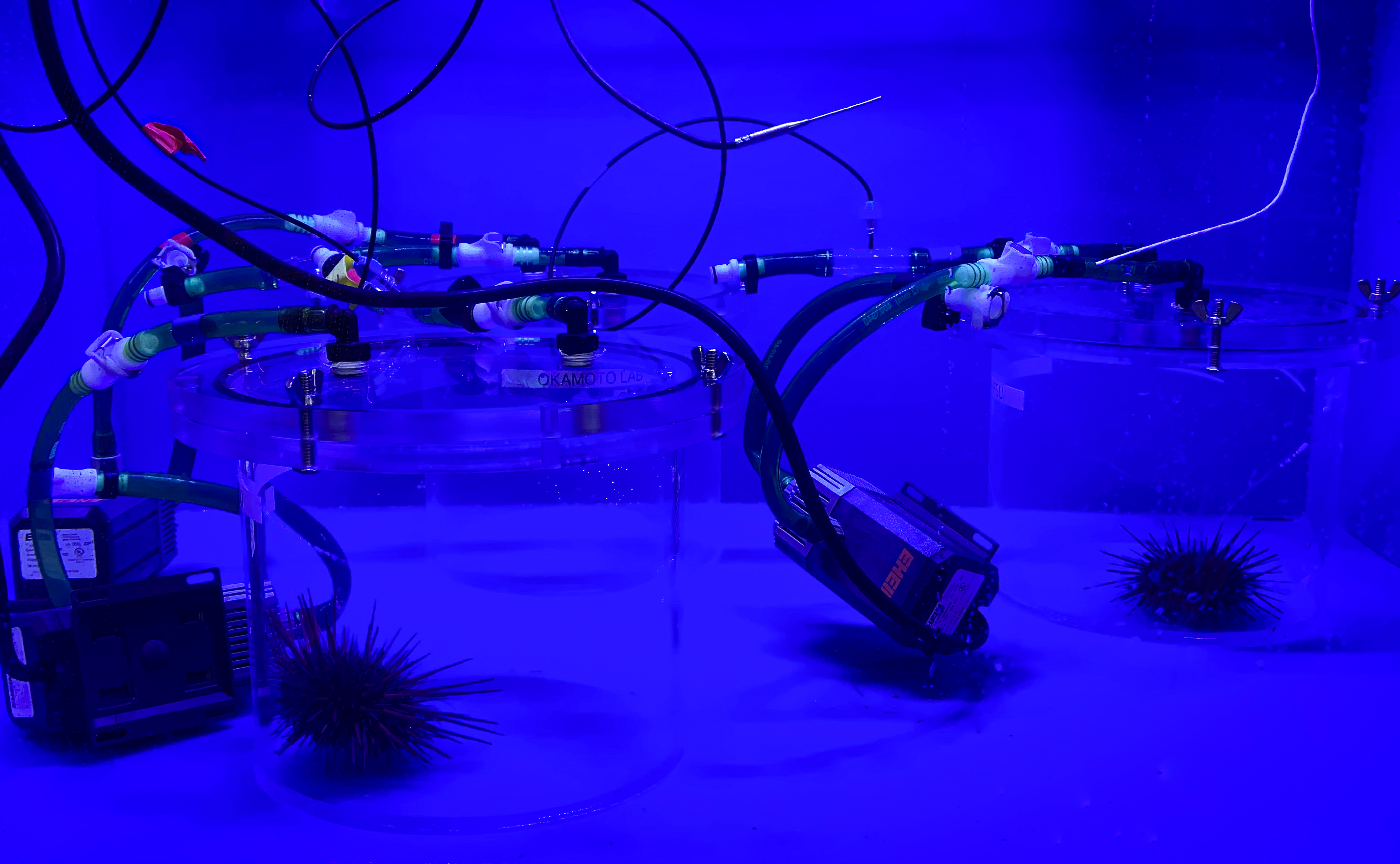 Ask people to imagine a scientist studying animal behavior, and they might conjure up an image of Jane Goodall jotting down notes next to a chimpanzee or Pavlov ringing a bell at a dog. Sea urchins, those spiky softballs with an affinity for munching seaweed, don’t immediately jump out as a creature capable of complex behaviors. But though they are brainless, urchins aren’t automatons. Urchins defy expectations.

In British Columbia, sea urchins live in a range of underwater habitats with two extreme states: an all-you-can-eat kelp forest buffet, or a comparative food wasteland—aptly called a barren—surrounded by an army of hundreds of spined brethren. As voracious and highly mobile grazers, urchins can eat enough kelp to both create and maintain barrens, and are thus influencers for the entire floral and faunal community around them.

To some extent, urchins determine their own fate. Where they live and the amount of available food affects the quality of an urchin’s reproductive gonads—the bit that humans and other animals like to eat. So researchers wanted to find out how urchins vary depending on if they live in kelp forests or barrens, and how other stressors, such as climate change, might affect them, too.

Olivia Rhoades, a postdoctoral researcher at the Hakai Institute and the University of British Columbia, is exploring these questions through lab and field experiments at Hakai’s ecological observatories on Quadra and Calvert Islands.

Though red urchins can grow almost to the size of a volleyball, Rhoades’s test animals were closer in size to navel oranges. For each of seven trials, 20 of these urchins—half from barrens, half from kelp forests—were placed in separate aquaria at one of five water temperatures that mimicked current and predicted warmer conditions. In the opposite corner of each tank was a delicious strand of kelp attached to a rock. Each urchin’s movements around its aquarium were tracked by video for four days.

Rhoades and her colleagues had no idea what to expect. Perhaps the barren-sourced urchins, desperate for food, would beeline it to the kelp like hungry teenagers to a pizza? Maybe the kelp forest urchins, healthier and more perceptive, would be fine-tuned to find food? Would water temperature factor in? The urchins had other ideas.

“Some urchins didn’t move at all,” says Rhoades. “Other urchins traveled all over the tank, but somehow never found the kelp. And others grabbed the kelp right away.”

As for the unanswered question of why hungry urchins didn’t all take the free lunch, it shows just how much we have to learn about urchin cognition, perception, and behavior.

“Often, scientists think of these behaviors as deterministic,” says Rhoades. “The availability of food, their prior experience, and the water temperature will determine what animals do.”

But given the range of responses of urchins from the same habitats and same water temperature, there could also be a genetic component at play.

For the next phase of the experiment, Rhoades and her colleagues looked at how urchins use the food they eat, or their metabolic rate. Each urchin was placed in a special pumpkin-sized chamber that measured how quickly it depleted the oxygen in the water. But that’s only step A. To get another key variable to calculate metabolic rate, scientists had to cook the urchins at 550  °C—and unfortunately, urchin combustion comes with olfactory drawbacks.

Scientists around a campfire could go on for hours about the worst smell they’ve had to endure in their work—a dead whale, a salt marsh at low tide, forgotten fish samples left to rot. Combusted urchins are a new contender.

“It’s a stay-in-your-clothes kind of smell,” says Meagan Abele, a Hakai researcher who was integral to designing and conducting the experiment. “It’s like shellfish that’s been left out too long. Then just the most intense burnt smell on top of that.”

Rhoades joked that these were the urchins fighting back from the grave, and ended up baking chocolate chip cookies to pacify others in the lab who had to endure the experiment’s pungent aroma.

While she still has more data to analyze, observations from the urchin behavioral experiment have opened up more questions. While water temperature might not have had an obvious effect on urchin behavior in this experiment, what about ocean acidification? How long do urchins actually remain within kelp forests or barrens? What causes them to change their movements and feeding behaviors?

And with more questions to explore, we may not have seen the last of the stinky urchins and peace offering cookies.