Molecular techniques and teamwork are giving scientists an unprecedented look into the plankton dynamics in the Strait of Georgia.

“Examining this water … I found floating therein diverse earthy particles, and some green streaks, spirally wound serpent-wise … and I judge that some of these little creatures were above a thousand times smaller than the smallest ones I have ever yet seen …” 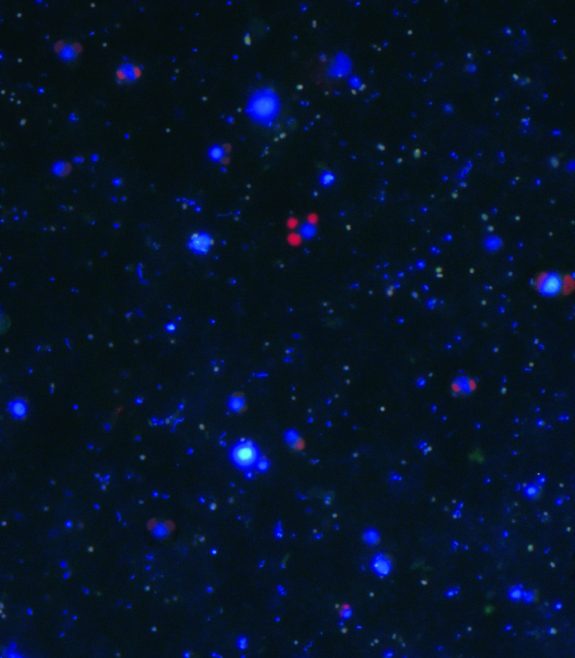 Trying to classify single-celled organisms in a microscope photo is a challenge. Scientists turn to molecular techniques, such as high-throughput sequencing to identify what species are present. Photo by Caterina Giner

Oceans are far from empty. Over a million bacteria can be found in one drop of seawater. The same drop teems with single-celled organisms—some photosynthetic, some predators, which gobble up the bacteria. In turn, these diminutive flora and fauna become food for even larger creatures. But marine food webs are nowhere near that simple. And until recently, we couldn’t even begin to identify the major players.

To study phenomena as complex as marine food webs, you need a team of scientists. The Hakai Institute, the University of British Columbia (UBC), and other partners have assembled just that—an integrated group of researchers, each focusing on a different subsection of the food web.

“What is unique about this project is that it brings together scientists working on vastly different groups of planktonic organisms, who do not typically work together,” says Brian Hunt, Hakai professor in oceanography at UBC. “It is only through an integrative approach that we can figure out how these organisms interact.”

The smallest members of the food web pose a challenge. Imagine describing the Serengeti, but without being able to differentiate a lion from an antelope from an acacia tree, let alone understand how they interact.

“For bacteria and other small creatures, there are no discernible morphological characteristics,” says Caterina R. Giner, a Hakai postdoctoral fellow at UBC.

She shows me a photo taken through a microscope of the critters she studies. It looks more like a telescope image of distant stars and planets than it does small animals and plants. Since microscopes can’t help identify the smallest components of the food web, the scientists turn to the building blocks of life.

“Since we can’t tell who a microbe is just by looking at them, we look to their DNA to tell us who they are and what they are doing,” says Hakai scientist Colleen Kellogg.

Up until the early 2000s, scientists could only sequence one fragment of DNA at a time. High-throughput sequencing has changed everything.

“High-throughput sequencing is how we separate and identify millions of DNA fragments from the thousands of species living in a bottle of seawater,” says Kellogg, who adds that these chunks of DNA are later compiled into genetic sequences, which are stored in global libraries for future reference.

Since 2014, researchers have collected water samples once a week at a site three kilometers off Quadra Island in the northern Strait of Georgia. Samples come from five depths, ranging from the surface to the bottom at 260 meters. Few other places in the world, and nowhere else in North America, are there data sets with weekly samples over multiple years. 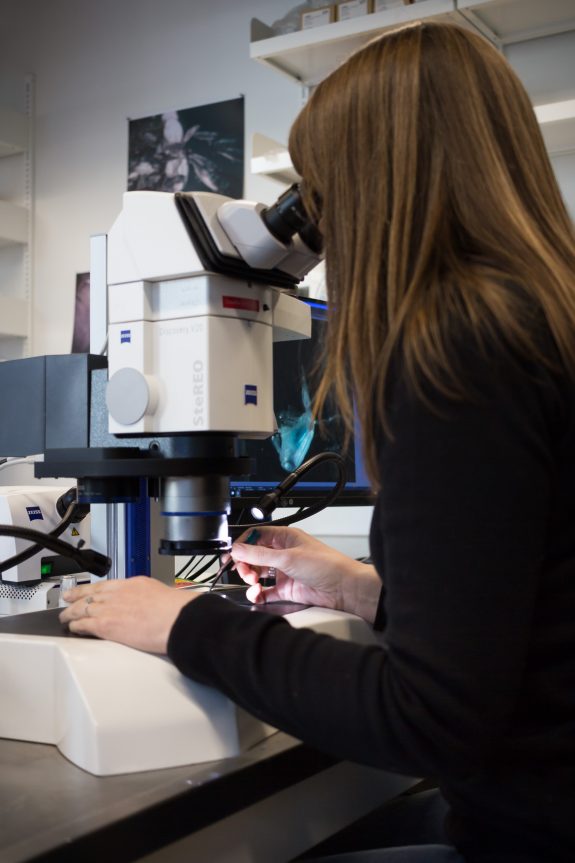 Jacqueline Maud, a Hakai postdoctoral fellow at UBC, looks at a zooplankton sample under a microscope. Using molecular techniques, Maud and colleagues are studying what zooplankton like this tiny crustacean are eating, as part of a broader look into the marine food webs in the Strait of Georgia. Photo by Josh Silberg

From these samples, Kellogg is tasked with the smallest living organisms—bacteria and archaea. Some of these tiny organisms are important photosynthesizers, turning sunlight into food. Others are master recyclers, which digest organic matter and return nutrients back to the ocean. Without these diminutive cells, the ocean, and our Earth, would be a much less hospitable place.

As we move through the food web, the next grouping on the tree of life are called protists—a diverse collection of single-celled organisms. These include phytoplankton like diatoms, dinoflagellates, and unicellular algae, as well as certain single-celled critters that feed on bacteria.

“I’m the connection between the bacteria and the larger organisms in the food web,” says Giner, with the characteristic glint in her eye that scientists get when they talk about what they study.

Some large photosynthetic protists, such as bulky diatoms and dinoflagellates are well known, but smaller photosynthesizers and the predatory protists were often overlooked. Without these tiny predators, the oceans would be overrun with bacteria.

Even larger creatures—the multi-cellular zooplankton—then eat Giner’s focal critters and the responsibilities are passed to Jacqueline Maud, a Hakai postdoctoral fellow at UBC. Zooplankton range in size from micrometers to centimeters and are generally large enough to be identifiable with a microscope. However, to figure out how these zooplankton fit into the food web, you have to know what’s in their stomachs, and that involves heading back down the size ladder to those blurry blobs.

“This is quite unique because most previous work has been done on a few species in a couple samples, and often not in coastal waters,” says Maud.

That’s where the combination of high-throughput sequencing and teamwork opens up new possibilities. Because of Giner and Kellogg’s research, we can identify the species in the zooplankton diets. If you grind up a tiny predator zooplankton critter or stomach, sequence the DNA, and then selectively remove the zooplankton’s DNA sequences, you’re theoretically left with a genetic signature of its stomach contents. This signature allows the researchers to characterize the full range of species in a zooplankton’s diet.

“This is quite unique because most previous work has been done on a few species in a couple samples, and often not in coastal waters,” says Maud. “It’s a huge task, but it is the first time anybody’s trying to use molecular gut content analysis on many plankton species at once across different seasons to put this all together into a food web.”

Previous studies tended to be biased toward hard-bodied prey in the guts that remain identifiable, which meant that what scientists historically thought they knew about zooplankton diets may not be the whole story.

By working together, the members of this initiative are not only beginning to identify the components of the coastal ocean food web, but also the complex connections between these pieces. Other members of the team are looking at zooplankton parasites, linkages between zooplankton and salmon, viruses, and jellyfish.

“It is hard to fathom the complexity of life in a bucket of seawater. There is a vast array of planktonic organisms that are all interacting and at the same time responding to ocean conditions,” says Hunt. “The product of this complex web is the essential food supply that supports herring, salmon, and just about every other animal on our coast.”

With weekly samples, the team can also see how the food web changes through the seasons, over multiple years, and as the climate changes. Eventually, they hope to couple these food web studies with oceanographic observing data. The broader Strait of Georgia can then act as a model coastal ecosystem. But first, there’s bottles and bottles of seawater to filter.