For Blood Stars, Looks Can Be Deceiving - Hakai Institute

For Blood Stars, Looks Can Be Deceiving 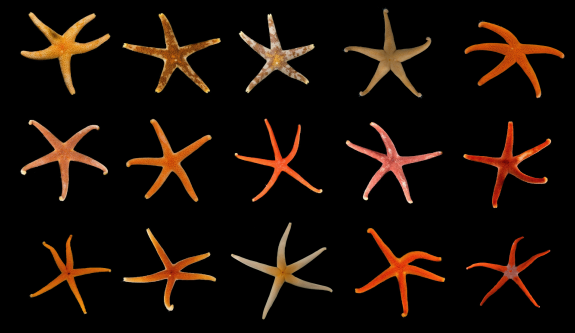 How many species of blood stars (Henricia sp.) do you think are in this photo? Collage by Matt Lemay and Josh Silberg

Some animal species are a breeze to identify. That plump masked mammal lurking in your backyard? Clearly a raccoon. That large dark bird with a white head and bright-yellow beak soaring overhead? Definitely a bald eagle. But other groups of animals can confound even the most experienced naturalist.

That’s the predicament Hakai Institute scientist Matt Lemay recently found himself in. A trio of summer bioblitzes, conducted on British Columbia’s Calvert Island between 2017 and 2019, had left Lemay and his colleagues with a considerable collection of sea stars belonging to the genus Henricia, otherwise known as blood stars for their sanguine hues. These sea stars are notoriously difficult to identify, since they include many examples of what biologists call cryptic species—related organisms that look alike, but are actually separate species.

Without the help of genetics, it’s nearly impossible to tease apart cryptic species. So though it’s tempting to organize blood stars by looks—grouping them by color, skin texture, or arm length, for example—you’ll almost certainly come away flat-out wrong.

Lemay recently demonstrated how perplexing these species can be when he posted a collage of blood stars to Twitter and invited people to guess how many species were pictured. One respondent speculated they were all distinct species—a whopping fifteen in total. Another estimated they all belonged to one species.

“The actual number of species? I wasn’t sure how many we’d get until we sequenced their DNA,” says Lemay. 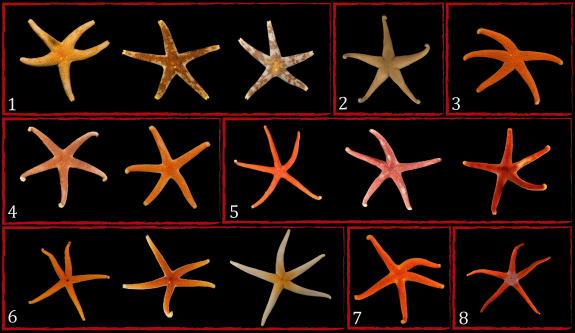 Through genetics, scientists determined there are eight different species of blood stars represented in this photo (separated by red boxes). Four of these species were previously undescribed, and will be designated complete scientific Latin names in the future. Collage by Matt Lemay and Josh Silberg

So how many species did Lemay identify with the help of genetics? Eight. Four were known species, while the other four got binned with provisional names like Henricia sp. AAF2468. Now they await taxonomic descriptions and a formal Latin scientific name.

When it comes to counting species, Lemay says, “blood stars are a real poster child for where genetics really makes a difference.” He swears that his goal wasn’t to pull a fast one on his followers, but rather invite them to share in the excitement of discovery. Differentiating species, he adds, is about more than just quizzing people on social media.

It’s important to be able to distinguish species to get a better understanding of how environmental stressors can affect them at an individual or species level. The recent outbreak of sea star wasting disease seems to have mostly spared blood stars, but because of the number of cryptic species, scientists don’t know if all Henricia species had resistance, or just some. To reach that level of understanding, it’s critical to know which species is which.

So far, scientists have only sequenced half of the blood stars collected during the bioblitzes, meaning the number of identified Henricia species will almost certainly go up. Stay tuned.